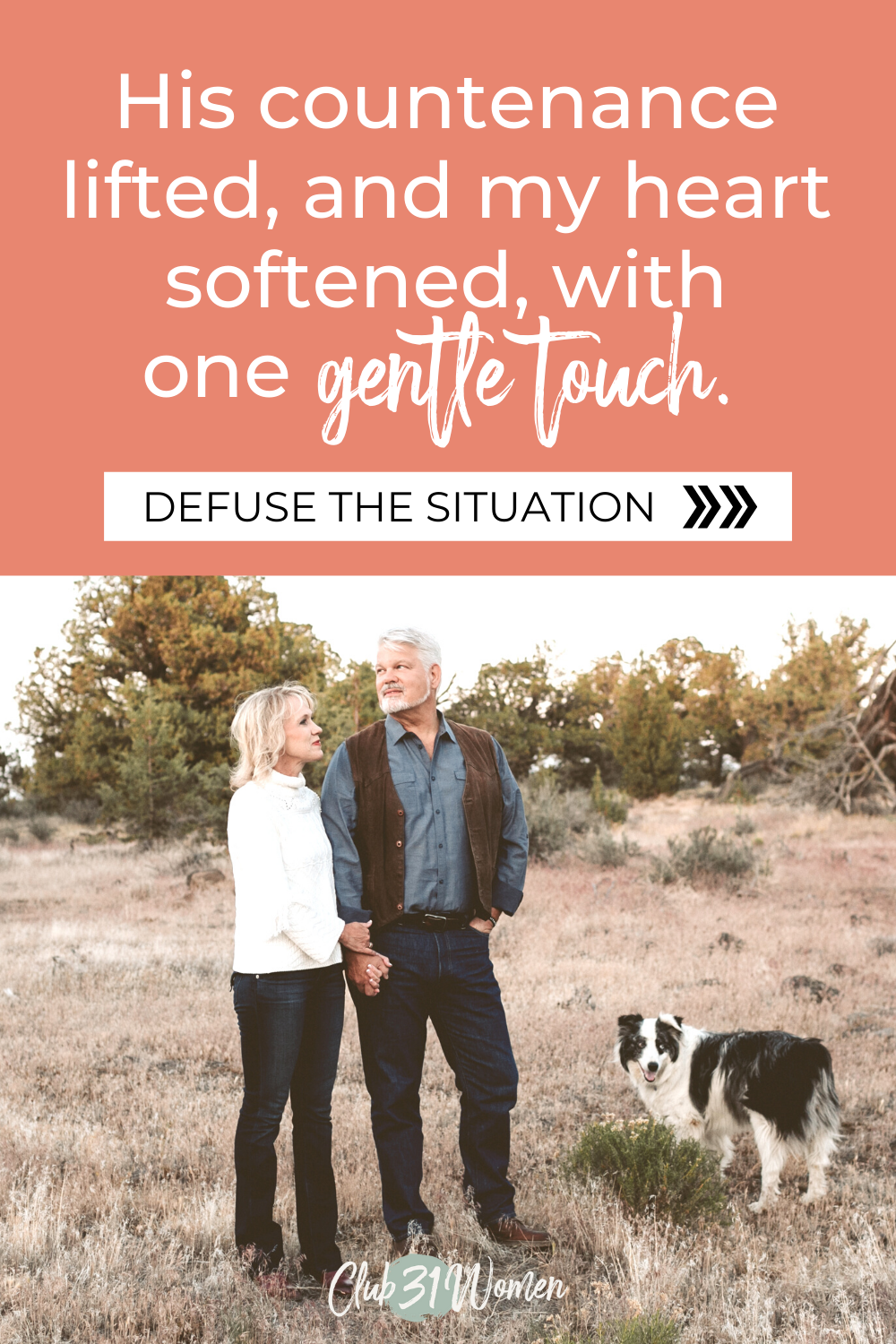 ….to avoid quarreling, to be gentle, and to show perfect courtesy toward all people. (Titus 3:2b)

Matt and I were definitely having our differences that day. Nor was this some mild dispute like whose turn it was to pick up the kids or who left the stove burner on. No, this disagreement had to do with extended family, and, sadly, turned real personal, real quick.

You wouldn’t think that an invitation to an upcoming family event could cause such strife, yet there we were staring at each other in the bathroom hall as if the other person had a serious problem—and I was sure convinced it wasn’t me.

I could go into the details, give you the background, and list out each of our compelling reasons, but the bottom line was I didn’t think we should go—and Matt did.

Although we agreed to temporarily put the issue aside and carry on with the day, you can believe there was a significant amount of tension between us. I could practically feel the friction each time I walked by his chair.

I knew we needed to work it out. Matt and I don’t like letting much time go by before we resolve an issue such as this. But the resolution wasn’t going to come easy. It would take time and relenting on both our parts—and neither of us was ready to give in right away.

So I reverted back to an old favorite when in an argument with him: I ignored him, pretending as if he wasn’t in the same room typing away on his laptop. Like a small child, I made him “invisible,” and, of course, we all know how helpful that is. I’m not saying it’s a good or healthy approach, just admitting that this tends to be my natural impulse when I’m seriously upset with him.

But then, about the fifth time I passed my invisible husband in his chair, I abruptly stopped. He looked up, anticipating that I was going to revisit the subject that we so strongly disagreed over earlier that day.

But he called it wrong because I gently stroked his face instead.

And, trust me; it must have been Spirit-led because it was certainly the last thing I felt like doing at that moment. I wanted to argue. I wanted to stay angry. So what was with that impulsive gentle touch?

I cannot answer that. But I will tell you that it was a game-changer. And by that, I mean his countenance lifted, and my heart softened.  With one simple touch, we were both in a significantly better place to work out our differences. Who would’ve seen that coming?

So how about you? Have you ever considered the power of a gentle touch in your marriage? A gentle word? You might be surprised at the powerful effect sweet gestures can have on your marriage.

We might mistakenly believe we should reserve our gentleness for the very young or vulnerable—perhaps a child or a frail grandparent—but there’s no such distinction found in Scripture. In fact, in Titus 3:2, we’re instructed to “always show gentleness to all people” (CSB). That certainly clears things up: there is no distinction of young or old, weak or strong, child or parent or spouse. Your husband counts as among “all people,” and so the Bible recommends—no, instructs—to show him gentleness. And this doesn’t mean to save it only for the good moments but we can apply it to the rougher times too.

And if you’re one who struggles to be gentle; it doesn’t come naturally or seem necessary to you, or perhaps there’s something about expressing gentleness that makes you feel uncomfortably vulnerable. If that’s you, then you can turn to Jesus Christ as your strength and example. He specifically describes Himself as “gentle and lowly in heart” and instructs His followers to “learn from Him” (Matt. 11:29). As believers, we want to become more and more like Christ, and, friend, He is gentle.

Can you think of a time when you were gentle with your husband? What was his response?

How could you show more gentleness to your husband – with your words, tone, or touch?

So what is the secret to a happy, thriving, loving marriage, where the fire of romance and close friendship does not fade? The Flirtation Experiment is perfect for the wife who wants laughter, passion, and the closeness that only comes from a deep heart connection but isn’t sure where to start.

You can connect with Lisa on Instagram for more biblical encouragement!