My best and brightest moments have been laced with weakness. 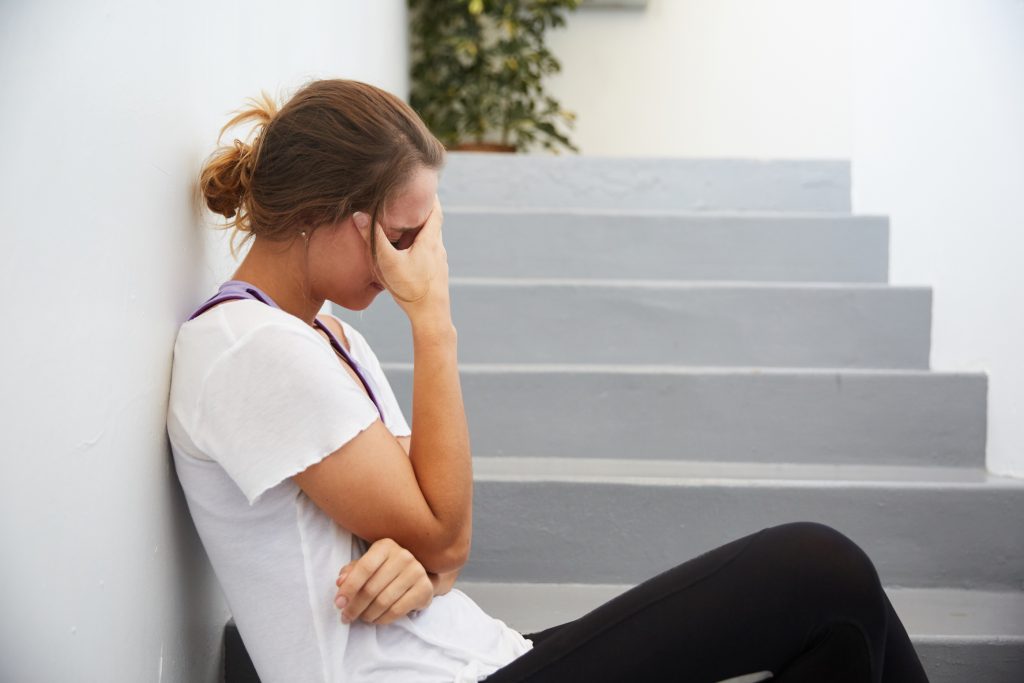 We met our first two children in Ethiopia and spent our first days of parenting in a tempered state of shock over the rolling meltdowns. While adopting our second two children from Uganda, I saw miracle-level movements of God I’d never before or since seen. Even in the times when we’ve repeated the stories, I feel that lump-in-my-throat awe over just how rare they were and how near He felt. And yet in between those miracle days were tearful nights under mosquito nets and terse words spoken to the man I love, the one who brought us there, and more of my own meltdowns than I’d like to admit over power outages and the broken shower in the guest home and the smoggy air.

(Nate tells the stories from Uganda — these glorious moments that only God could have orchestrated — to new friends and others who hadn’t heard what we saw and I can’t help but flash back to the argument we had outside of the van scheduled to take us to our court appointment, and in front of the unsuspecting driver who quickly got schooled in American conflict.)

Yet somehow I still imagine the most glorious moments I have ahead of me in God to be seamless. I look at others who’ve accomplished what I consider to be great feats of faith and ignorantly assume they came with ease.

Our greatest stories in God are laced with weakness and we humans don’t like it.

Though I quote Paul’s letters to my children and to my fickle heart, I often forget what he walked through in order to be able to say “I can do everything through Him who strengthens me” (Philippians 4:13). I love that David was a man with a pulse melded towards God and one about whom God looked through his boyishly-rouged cheeks to see a heart that could hunger, but I’d like to ignore the tryst that leveled his life and made him weak and needy for God, and the son who stealthily betrayed him.

I want His best moments to also include me, at my best. I give accolades to friends who “pulled it off” and slap an “I’m doing well” on the times when I feel best about my motherhood and my home and my marriage and my friendships. I still want the great strength of God and my own great strength, too.

But it never happens that way. No, never.

When my human strength attempts to compete with His glory (let’s be honest: near daily), I am subtly despising the unique way (read: unfamiliar, unconventional, not-of-this-place-where-we-live) that He moves in power.

But we have this treasure in jars of clay, to show that the surpassing power belongs to God and not to us. 2 Corinthians 4:7

David and Paul knew His eyes on them when their lives fell apart. They knew destitution of the heart and body and yet also how one received look from God made that single moment their richest. They knew what it was like to have their heart … race. In love. From love. All because of a surprising brush with the near gaze of God in their most unsuspecting hour.

When I’m admittedly weak (because, as my husband sometimes tells me, my stated “weak moments” are truly just the ones where I’m acknowledging a weakness that was already there before I noticed it), I’m supple. Receptive. His glory streams brighter through all the holes in my countenance. 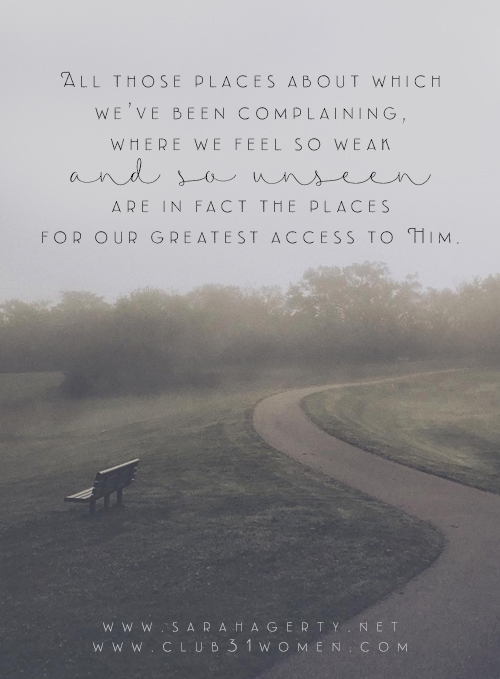 So let’s stop dreaming about the day when it’s all slick and we’re strong and then God is glorified. It’s a myth.

All those places about which we’ve been complaining, where we feel so weak and so unseen, are in fact the places for our greatest access to Him.

And He said to me, “My grace is sufficient for you, for My strength is made perfect in weakness.”Therefore most gladly I will rather boast in my infirmities, that the power of Christ may rest upon me. 2 Corinthians 12:9

[To read more about those kind eyes — the ones that see you in your top knot, un-showered or by the bedside of a sick parent — I’ve written a book just for you: Unseen: The Gift of Being Hidden in a World that Loves to be Noticed.]

Sara Hagerty is a lover of God, a wife to Nate, and a mother of seven-four adopted from Africa and then more through miracle pregnancies. She’s also a bestselling author and speaker. As a lifelong admirer of words, Sara has experienced their power to revive. Raw words written in tearful honesty and shared with her readers. Words whispered in hidden places as conversation with God and worship to Him. Today Sara’s words offer God’s hope to readers facing unexpected life circumstances. You can follow her on Instagram @sarahagertywrites.