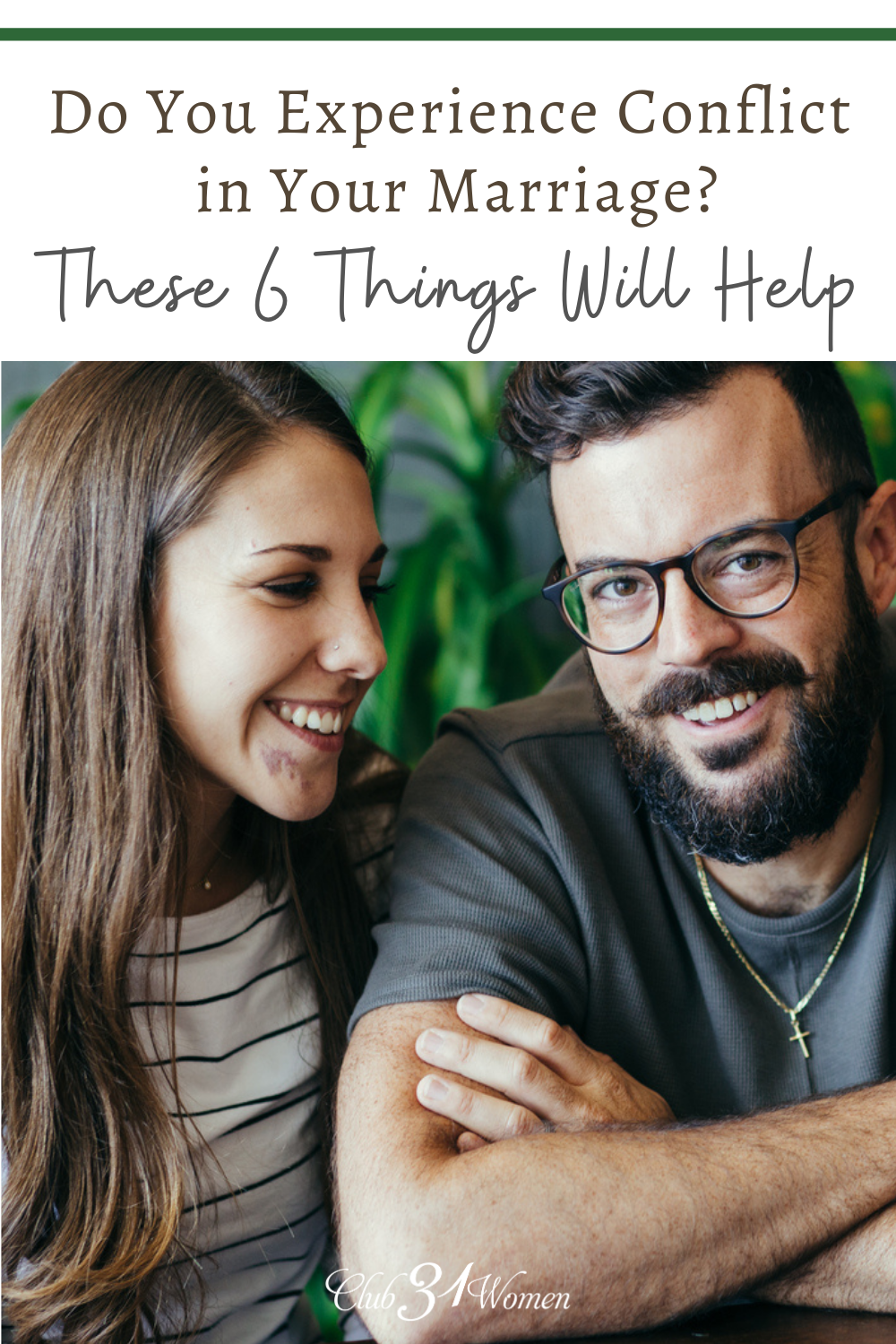 So, do you have conflict in your marriage?

If your answer is “no,” you may be the only couple in the world. (Or you could be in denial!)

We are two sinful, selfish humans trying to become one. Conflict is as old as creation. Adam and Eve got into conflict as to whose fault it was. And we’ve inherited their self-centeredness, a desire to be right, a tendency to blame, and a need to control.

John and I have been married for over 51 years now. We are very familiar with conflict. We’ve experienced it, we’ve seen it in others, and yet we’ve grown from it. In this world, we will always have conflict.

The goal in marriage is not to be conflict-free but to learn how to resolve conflict in a healthy manner.

I have a vivid memory of our first fight. It was sometime during our first year of marriage. I remember bursting into tears and saying to John,

“Maybe we never should have gotten married in the first place.”

What he gave me with this statement was a sense of security. Our marriage was not to be questioned. We had pledged before God, “until death do us part,” and we meant to keep that pledge.

In today’s world, many marry with an “escape clause.” Even Christians. It seems the marriage commitment has become relaxed and full of contingencies.

“I just don’t love him anymore. God wants me to be happy. My husband doesn’t make me happy. Maybe we’d be better off divorced. “

God is more concerned with our faithfulness than with our happiness.

Determine as a couple to never use the word divorce. Recommit to one another frequently. Each year on your anniversary, go through your wedding vows again. Celebrate frequently. (*abuse disclaimer below)

2. Communicate clearly and often to avoid conflict in marriage

With the stress and pressures of today’s culture, it’s easy to find ourselves just “passing in the night” racing between errands, zoom meetings, a child’s schoolwork, an unfinished project that’s past due. It’s easy to fall into “functional communication”-who is doing what. Soon we realize we are not communicating at a deep level anymore. No longer sharing our fears, our dreams, our hearts with each other. Our relationship seems superficial.

In this state, it’s easy for little irritations to grow and grow, piling up complaints in our heads. Until one of us explodes.

This happens to all of us.

But it doesn’t have to.

We have to be proactive in growing in our communication. We cannot simply coast. Set aside a date each week simply to be together. Go out for 2 hours. Take turns planning something fun. This is not a time to discuss difficult issues. This is a time to build a friendship. Choose another time to discuss an issue. Put it on your calendar and pray ahead for the discussion. Don’t talk about difficult things late at night. You are tired and likely to say something you shouldn’t.

Before we were married, a wise older couple challenged us to a weekly date for the rest of our lives. We’ve tried to keep this, and it’s made a huge difference in our marriage. Just recently, in our empty nest years, we realized we’ve fallen into the trap of work, and work, and lost some of our playfulness.

So just this week, we made the commitment to an “US” day each week. A day just for us to do something fun.

There is a huge loss in our nation today. It’s the loss of civility. Cruel words run rampant in every part of our society. Leaders of every type and perspective spew forth meanness in their words towards others. In families, ugly words and accusations spark conflict and replace kindness. Sarcasm has become acceptable. This is not how it is supposed to be.   God’s word says, “Everyone should be quick to listen, slow to speak and slow to become angry because human anger does not produce the righteousness God desires.” (James 2:19)

We must learn to disagree without decimating each other. It is possible. It’s important for us as a couple, and it’s crucial for the model we are setting for our kids. Do not let your kids verbally abuse you or a sibling or anyone else.  If they are allowed to get away with this in your home, they will be more likely to abuse their own spouse and children one day. Roleplay ways in which to have a healthy argument, a polite debate. Do this often.

Respect is a character trait we desperately need to restore in our nation, and it begins in our home. 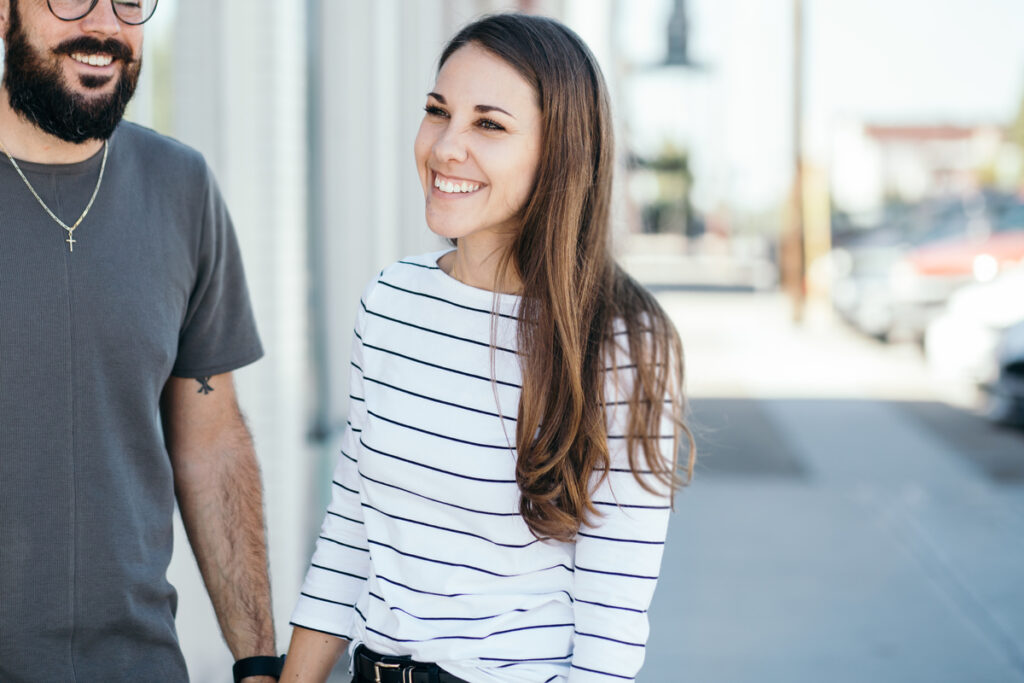 I believe the most important ingredient in the home is that of forgiveness. It’s also one of the hardest. I can’t count the number of times I’ve had to go to my husband (and to a child) to say,

“Honey, I shouldn’t have said (or done) what I did, and I need to ask you to forgive me.”

I’ve never felt like doing this, and I’d much rather have said, “but if you had or hadn’t…”

Just like Adam and Eve, I’d rather blame someone else.

I have learned that we go to one another asking for forgiveness not out of feelings but out of obedience.

God has called us to ask for forgiveness and to grant it. Feelings take time to be healed, and trust takes time to be restored, but the healing can’t begin until we go to one another. Your child is going to need to forgive his or her spouse. How will they know how to do this if they have not experienced it in their own home?

5. Beware of the Dark Cloud unneccesarily adding conflict to your marriage

John and I were sitting on the couch, catching up from the day. We were communicating well and seemed to be on the same wavelength. But then something switched, and all of a sudden, we found ourselves in a huge argument. What happened? It was as if a dark cloud had entered the room. As if an evil presence looked at this young couple in conversation and said, “I’ll divide them.”

John realized what was happening. He recognized this as the enemy coming at us. Ceasing our conversation, John prayed over us and commanded the enemy to flee. (James 4:7). The simple step of recognizing the enemy and praying for him to leave kept us from falling into unnecessary conflict in our marriage.

One of the enemy’s tactics is to cause division. Be alert to this in your marriage.

6. Remember God is For Your Marriage

You may be in a tough situation in your marriage. Most of us will go through hard times, and hard times will impact our marriages. Either we’ll pull together, or we’ll be pulled apart. We have to remember that God is for our marriage. He is the super-strong glue that will hold us together. God will bring us through life’s challenges if we rely on Him. He created marriage, and He will uphold ours.

If you are in a hard place in your marriage, get help. Seek out a Christian counselor. Ask your Pastor for a “mentor couple” who would be willing to meet with you. Spend time with those who will encourage you to move towards each other, rather than those who might say, “bailout.” Over the years, we have seen so many marriages healed simply because a couple decided not to quit and instead got help.

He can heal your marriage.

*(If you are in an abusive situation, you must get help. Talk to a Pastor and see a counselor. You cannot handle this alone.)

Susan Alexander Yates is a mom to five children (including a set of twins) and grandmother to 21 (including a set of quadruplets!). Susan and her husband John have been married 51 years. Susan has written 16 books and speaks on the subjects of marriage, parenting, faith, and women’s issues. Susan’s favorite time of the year is June when all her kids and grandkids are together for a week of “cousins and family camp” in the foothills of the Shenandoah Mountains of Virginia.